The Sweet Family only resided in Cave Creek from 1945 through 1949, but in those four years, George Sr and his wife Mary, daughter, Lyn and son George Jr., better known as Skipper, became an integral part of the dusty little town built beside the creek.

Initially leasing the Black Mountain Store (built in 1928 and the oldest existing commercial building in Cave Creek; now housing Oregano’s Pizza Bistro), the Sweets happily participated in Cave Creek life, as captured in snatches from Cave Creek’s weekly newsletter, Cavecreek Chronicle.   George and Mary became part of the lively social circle at Harold’s Corral, spending evenings with Rancho Manana partners Romy and Jean Lowdermilk and Ted and China Loring, as well as Colonel Goodheart, and Red and Rhonda Mattingly, and other well-remembered citizens of the era.

As well as proprietor of the Black Mountain Store, which sold groceries, dry goods, gas and oil and Indian jewelry, as well as serving as the outpost for the Maricopa County Free Library, George Sr. was appointed a Maricopa County Deputy Sheriff in 1947—a role that was as likely to have him delivering babies, inoculating and licensing town dogs, rescuing hapless tourists from the desert as have him escorting “happy” dam workers to a quiet place to sleep off a Saturday night.  He was also a founding member of the Cave Creek American Legion Post, still located on Cave Creek Road.  Mary Sweet was an avid horsewoman, often seen trotting around town and desert on her horse, Silver .  She was also a lively member of the American Legion’s Ladies Auxiliary and evidently a renowned cook and dancer.  Just as social was Miss Lyn Sweet, who was fourteen when her family moved to Cave Creek and a high schooler in Phoenix.  Her name was frequently mentioned as she traveled into Phoenix and Sunnyslope to visit friends and attend parties or performances, or joined a gaggle of other Cave Creek teens to picnic and swim at Seven Springs and Sierra Vista Ranch.  Youngest child, son George Jr “Skippy”, was a typical boy, often riding his bike out to Spur Cross Ranch to play with young Warren Beaubien, roaming the desert foothills in search of old Indian and military artifacts, exploring local swimming holes and getting into harmless mischief.  There was an oldest daughter, Jane, who was a nursing student in Phoenix; but her visits always occasioned a welcome in the pages of the Chronicle.

The departure of the Sweet Family in 1949 to move down in Phoenix must have left behind many wistful friends and quite a hole in Cave Creek’s social calendar.

The photos and items displayed as this month’s Artifacts of the Month were donated by both George Jr and Lyn (Sweet) Haynes.  Share a little of the Sweet Family’s Cave Creek lives in these excerpts from the Cavecreek Chronicle, as carefully copied and clipped from original copies of the newsletter and donated by Lyn (Sweet) Haynes to the Cave Creek Museum. 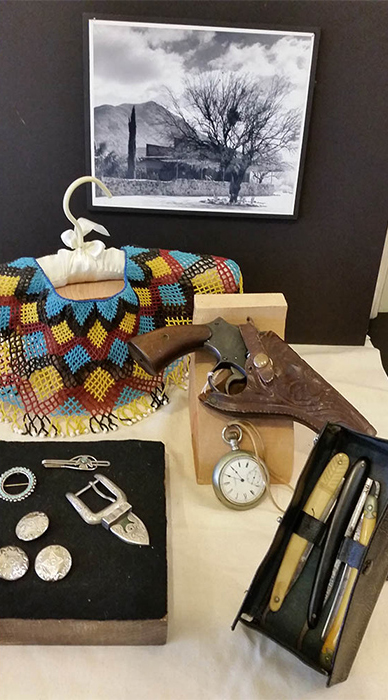