Look closely at this sweat and dust encrusted hat.  For years, this crowned George Mileham.  At George’s funeral in 1981, hundreds of locals gathered to mourning the passing of one Cave Creek’s “last cowboys”.  This is not the hat of a “dime store cowboy”.  This hat shielded its wearer from the sun and rain, swatted flies and rousted cattle and for decades was a valued and useful piece of headgear.  You knew George by the battered hat that tilted jauntily over his brow, be it on the range or at Harold’s Corral on a Saturday night.

Before artist and illustrator Lon Megargee was titled “Arizona’s Original Cowboy Artist”, he was a cowhand on several ranches in Cave Creek and those years bring forth a truth in his artworks, whether a large scale oil painting or as in this piece, a popular illustrated cover for the magazine Adventure, from  1921.  His iconic paintings capture moments of a time passed, of adventure and wide open spaces, of transcendent landscapes, pioneers and, naturally, cowboys and Indians.

Of course, all good cowboys have to start somewhere, so every little cowpoke should have a pair of spurs.  These charming child-sized spurs adorned the boots of a pint-sized ranch hand sometime in the early years of Cave Creek and remained a treasured possession even after he graduated to full-size.  We are honored to have them as a part of Cave Creek Museum’s collection of historical artifacts.

Finally, we have a bull-whip, like those that cracked above the head of the teams of horses that worked the drovers’ road between Cave Creek and Phoenix.  It was a full day’s trip from start-to-finish to make the trip one way.  Did you know that the crack of a whip comes from a loop traveling along the whip, gaining speed until it reaches the speed of sound and creates basically a small “sonic boom”?  It takes a skilled hand and a lot of practice to actually crack a whip.  Some experienced drivers had the finesse that they could snap a fly off their team’s ears with a flick of the whip!

Explore a lot more of Cave Creek’s Cowboy past, including our “Saddle Up!” exhibit, at the Cave Creek Museum during the 2014-2015 season.  We’ll be pleased to trade howdys with you! 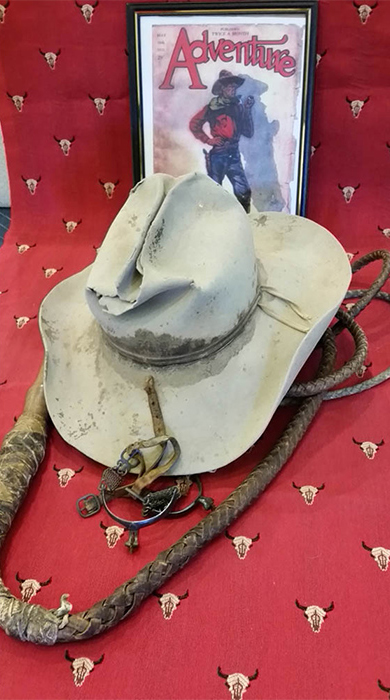