The sandal shown as artifact of the month is the prehistoric equivalent of a cheap flip-flop —for a minimal investment, you get footwear that lasts for a decent amount of time, and that you throw away afterward. To make one, all you need is long, flat strips of tough fiber plus cordage for the fastening loops. Start at one end and weave the strips one over, one under. When you reach where the edge of the sandal should be, fold over the strip at roughly a right angle and work it back across the sandal. When the sandal has taken shape, the loose ends are tucked in.

The raw material elements that are used to construct the sandal are generally yucca leaves that may or may not be twisted, or thickly twisted yucca yarns. Generally, there are no patterns woven into the sandal, or use of color motifs. The body shape is almost always an oval to rectangular configuration with rounded toes and rounded heels. The method used to tie the sandal to the foot is generally a toe-heel tie system, such as the one on display.  A better sandal example is in the Archaeology Wing’s fiber drawer

In addition to the sandal, this exhibit includes a chert object listed as a sandal last and a similar one in wood. These artifacts were donated to the Cave Creek Museum from the collection of Jack & Jean Owens, who owned Sierra Vista Dude Ranch.  They are listed as having been found at Risenhouer Ranch, Yellow Jacket, Colorado.

Noted early anthropologist Frank Hamilton Cushing theorized “There remains yet to be learned the exact modus operandi of sandal-weaving requiring the employment of the stone last, and just how it was employed. My guess was that the fiber strands were passed around the stone at stated intervals, and upon these as a foundation the weaving proceeded on both sides of it alternatively, following the same stitch design in both; so that when finished, dried and cut apart the sandals were the counterpart of each other excepting that the stone curves were reversed, constituting them ‘rights and lefts.””

An alternate theory was proposed by Robert A. Graham, in The Textile Art of the Prehistoric Southwest dated 1933. “The sandal under discussion may throw light on a certain artifact generally known as the “Sandal board” or “last”. No definite evidence warrants the name, yet there is some reason to believe that it did serve as a sort of loom on which sandals might be woven. Some sandals are so constructed that the weaver could merely have lain the warps out on the surface of the ground and inserted the wefts. Others would have necessitated little more than some method of tying down ends of the warps, so that the wefts could be beaten up compactly. With the use of a sandal last, weaving could proceed rapidly. These sandal lasts are generally some six to seven inches in width and ten to fourteen inches in length. They are slabs of wood, some nicely rectangular, others crudely so, and they are usually concave laterally.”

As for the mud inside the sandal, is it intentional?  Some sandals had the interior coated with a layer of pitch, making them waterproof and giving some extra protection from stones and cactus spines. Could mud mixed with a binder have also been used? 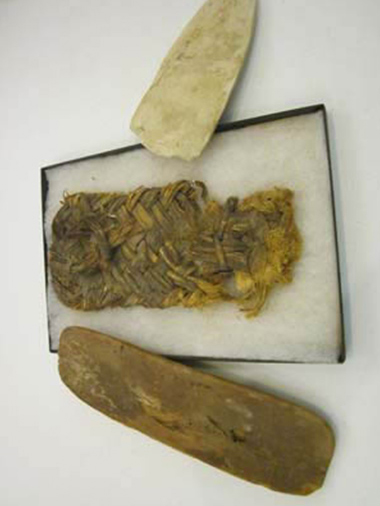