A small sherd, a broken piece of pottery about the size of a quarter that has part of a human figure painted on it. It was made by the people we call Hohokam.

The Cave Creek Museum has some modern reproduction pots showing how these figures would look when complete. They were made by Charles Gilbert. Some of Charlie’s reproductions are shown with this sherd, and others are on display in the Archaeology Wing. He taught many people how to collect natural clay and make pots in open fires the ancient way.

What was this little figure doing when it had its head and all its arms and legs? Many pots and fragments recovered from archaeological sites show the little people holding hands in line like dancers. Some had burden baskets secured by tumplines over their foreheads. Some are holding long staffs, some have feathers on their heads. And others, though unfortunately not in our examples, are playing flutes.

The Hohokam lived in the Salt River and Gila River basins in central Arizona for more than a thousand years. The longevity of their culture and their accomplishments were amazing. They developed a complex society based on irrigation agriculture. It’s difficult to assign dates, but many archaeologists say the recognizable culture appeared about 450 A.D. People were living and growing corn in Arizona long before that, but in this era pottery became one of the marks of the culture.

When did the human figures appear on pottery? Technology of pottery making and popular designs changed over the centuries, allowing archaeologists to divide pottery into phases in an approximate chronology. The figures appear in the middle, around 600 to 1100 A.D. These centuries are divided into three pottery phases, Gila Butte, Santa Cruz, and Sacaton. The round-bodied little people seem more common in the Santa Cruz phase. Whatever the date, we are fortunate to find these happy As always, your membership supports collections, figures dancing around their (and our) pots 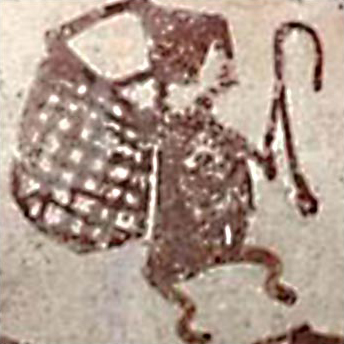