Cave Creek Museum is honored to salute our residents of Cave Creek and Carefree who have so proudly served in the US military.  We respect and appreciate the sacrifices all our servicemen and women and their loved ones have made for the United States of America.  We are happy to feature as November’s Artifacts of the Month keepsakes to the museum through the years.

Frank W. Wright’s Dogtags-1918: Frank W. Wright served in the battlefields of WWI.  Severely gassed and injured during his military career, Mr. Wright was sent to Arizona to die.  He did—at 89 years old.  In his 60-some years as a resident of Cave Creek, he met and married a fellow “lunger”, Hazel, and when they did not have children, Cave Creek and its citizen became their brood.  Frank and Hazel were very generous with their love and support of the town.  In fact, the land you are standing on was donated by Mr. and Mrs. Wright to the Cave Creek Museum.

Joe Marta’s Bugle-1918: We don’t know a lot about Joe Marta, except he was generous to the Cave Creek Museum.  He left many donations at the back door of the museum, like the collection of miniature shoes featured in the Shoes of Many Sizes exhibit.  Another gift was this battered old bugle accompanied by a note that read: This bugle was issued to bugler Joe Marta at Camp D. Little at Nogales, AZ 57 years ago.  I will now donate it to the Cave Creek Museum-Joe Marta-March 24 1974. Did you know Joe Marta?  Do you know his family?  If you do, please let a docent or our Executive Director, Evelyn Johnson know.

Canvas Bag-1918: We don’t know a lot about this olive drab canvas bag except a note that says this too belonged to Joe Marta, so one can assume it was also issued about 1918.  As it is marked “forms”, we are guessing it was used to carry paperwork.

Ration Coupons and Wallet-1941-1945: Staples such as eggs, milk, meat, gas and clothing were in short supply during wartime, as the greater part of these goods were sent to support “our boys”.  To make sure every citizen at home received their fair share, ration coupons were issued for an allotted amount to individuals.  These coupons were kept in this leather, “Mexican-stenciled” wallet donated by Caroline Johnson.

My Soldier-possibly 1940’s: This propaganda leaflet with touching prayer and an encouragement to “Buy War Bonds” probably dates to the period of WWII.  Service families displayed these leaflets in their windows to indicate they had a family member serving.  Despite its age, the sentiments for the soldier and for whom they fight still ring true.  Donated by Caroline Johnson.

Bayonette  Sheath -WWI: Museum paperwork says this is a WWI souvenir of Joe Marta, shoemaker of Cave Creek.  Did you know Joe Marta? 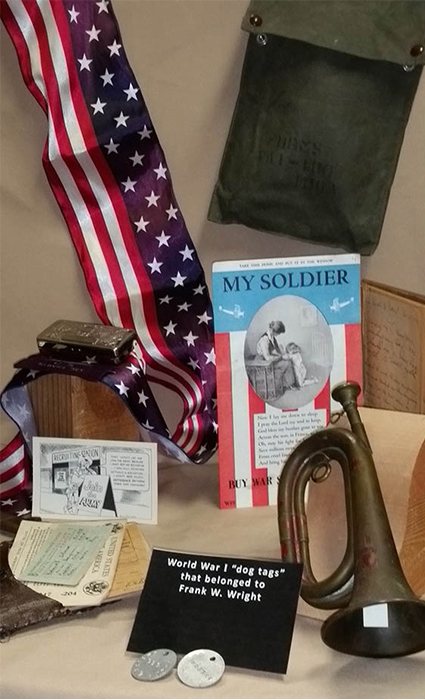