In the Hopi religion, Katsinas are supernatural beings that are kindly spirits of life, fertility and prosperity.  They are intermediaries to the gods, who come to villages and dance and ask the gods for bountiful crops, rain, and peaceful lives.  At three main Hopi Katsina ceremonies—December, February, and in July—dancers don elaborate painted and carved costumes to impersonate these benevolent spirits.  There are estimated to be between 300 and 400 of these benevolent creatures, although like saints in the Christian religions, some are much more popular than others and thus are more frequently depicted.

Katsina dolls were traditionally a gift to a Hopi girl-child and carved by her father or uncle.  Though it can be a plaything, it is primarily meant as a reminder of the Katsina and what they represent.  Beautifully carved and elaborately painted and decorated, it is not surprising that they became a sought-after collectibles as white settlers moved into the areas populated by southwest native peoples.  Though the Katsina beings and their representative dolls continue to be religious symbols to the Hopi people, soon skilled Hopi artisans were creating Katsina dolls to show-off their skill and to market as pieces of art.  The Navajo tribe also began to craft Katsina dolls, not for any religious significance but for the marketplace.

Originally, Katsina dolls were flat and rigid and only the heads were well-carved and were mainly meant to be displayed on the walls of homes.  At the beginning of the 20th century, Katsina dolls began to take on more lifelike appearances and were designed to stand up on their own.  By the mid-century, these dolls were amazingly crafted in lively poses and were adorned with feathers, furs, feathers and seashells.  When in 1975 the US government passed The Endangered Species and Migratory Bird Act prohibiting the use of migratory bird feather, the artists began to carve delicate and life-like feathers from wood; the Katsina figures began to evolve so that all of the doll—including clothing and jewelry, were carved of wood.  Today, the finest and most sought-after dolls are entirely fashioned of wood, but these are rare.  The majority of dolls is still detailed with fur, fabric, and feathers of domestic fowl and is much less expensive than the all wood-carved dolls.  Traditionally, Katsina dolls were carved by men, but now there are many famous women carvers.  There are commonalities in dress, headdress, adornments and mask of each particular Katsina, but every artist makes the doll very much in his or her own style.

Though you may frequently have heard and seen the word “Kachina” in relation to these dolls, the Hopi language does not have the “ch” sound in it; thus purists prefer the sibilant version: “Katsina”.   But however you pronounce it, the finest Katsina dolls are carved from the dried root of a cottonwood tree, are well-proportioned, detailed, and portrayed accurately. 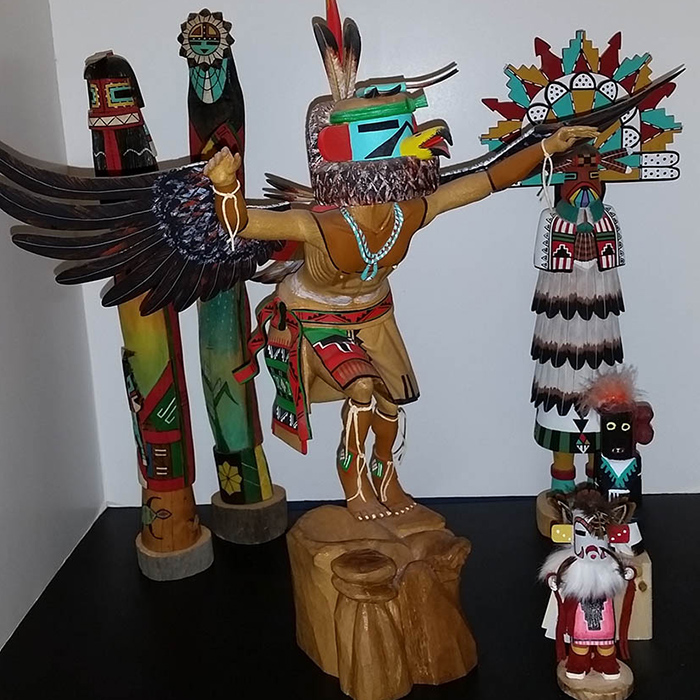