Hand fans first appeared in Europe in the 12th century and became popular in the 16th, carried by both ladies and gentlemen.  They remained popular into the twentieth century, even becoming popular advertising giveaways, but like gloves and hats and other article of civility, they were cast aside during the maelstrom of social change in the late 60’s and early 70’s.  It didn’t help that air conditioning was becoming a lot more common about that time as well!  Fans were made from just about any materials: paper, fabric, chicken skin—even human skin, and of just as varied materials were the little sticks that acted as a fan’s skeleton.  Fans were often minor works of art. Many survived and are in the hands of owners or museums throughout the world, such as the Cave Creek Museum!

Did you know there was even a “Language of Fans”?  Yes, indeed.  And what a pretty and playful way for a lady and gentleman to indulge in a surreptitious flirtation or a clandestine conversation!

1) THE FAN PLACED NEAR THE HEART: “You have won my love.”

2) A CLOSED FAN TOUCHING THE RIGHT EYE: “When may I be allowed to see you?”

3) THE NUMBER OF STICKS SHOWN ANSWERED THE QUESTION: “At what hour?”

4) THREATENING MOVEMENTS WITH A FAN CLOSED: “Do not be so imprudent”

5) HALF-OPENED FAN PRESSED TO THE LIPS: “You may kiss me.”

6) HANDS CLASPED TOGETHER HOLDING AN OPEN FAN: “Forgive me.”

7) COVERING THE LEFT EAR WITH AN OPEN FAN: “Do not betray our secret.”

9) SHUTTING A FULLY OPENED FAN SLOWLY: “I promise to marry you.”

11) TOUCHING THE FINGER TO THE TIP OF THE FAN: “I wish to speak with you.”

14) OPENING AND CLOSING THE FAN SEVERAL TIMES: “You are cruel”

20) PLACING THE FAN BEHIND THE HEAD: “Do not forget me”

21) PLACING THE FAN BEHIND THE HEAD WITH FINGER EXTENDED: “Goodbye.”

23) FAN IN LEFT HAND IN FRONT OF FACE: “I am desirous of your acquaintance.”

25) DRAWING THE FAN ACCROSS THE FOREHEAD: “You have changed.”

26) TWIRLING THE FAN IN THE LEFT HAND: “We are being watched.”

27) TWIRLING THE FAN IN THE RIGHT HAND: “I love another.”

28) CARRYING THE OPEN FAN IN THE RIGHT HAND: “You are too willing.” 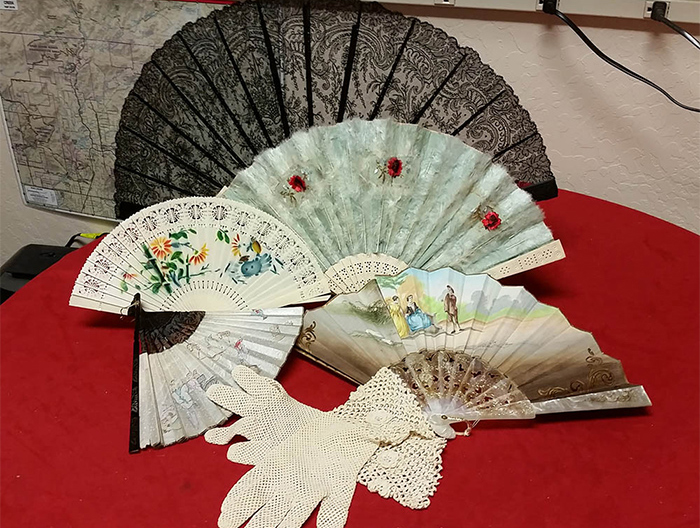