The Cave Creek Christmas Pageant was the brainchild of Jean Hagler, 4-H leader on a mission to give back to the community.  In 1952, a group of eight girls corralled their brothers and sister and any other children in the community to help with the pageant.  They found the perfect location at the base of the northern slope of Black Mountain at a place called Tse Bonita, the “beautiful rocks” in Spanish and Navajo.  It became home to the pageant for the next forty-five years.

The Christmas story was told with children playing the parts of Biblical characters wearing costumes made of bathrobes and towels and cut-up burlap.  Parents and the rest of the family helped prepare the natural stage for the event.  Community members sang familiar Christmas melodies from behind the rocks.  Live animals such as mules, horses, sheep and donkeys were included in the production.  On the day of the pageant, luminarias were set all around the roads leading to Tse Bonita and in the evening, the mountainside glowed with soft light.

The pageant was not meant to be an annual event, but it became so popular the Cave Creek Improvement Association involved new people and ideas, integrating advanced technology in lights and sounds.  Word spread about the spectacle and soon folks from Phoenix, all around the state, and even outside the borders of Arizona were making the pilgrimage to see the annual event.  After forty-five years, a change in ownership of Tse Bonita forced the pageant to move to a wash behind Desert Arroyo Middle School.  For five more years the pageant continued, but after the fiftieth year, the Christmas Pageant ended and its supporting organization disbanded.  Records and memorabilia were handed over for preservation to the Cave Creek Museum.  In 2003, there was no event at Spur Cross or anywhere.  The Luminaria Run was created to at least keep the luminaria trail aspect of the event alive.

But in 2004, Cave Creek resident Toby Payne, a pageant volunteer since 1992, asked the Foothills Community Foundation to support the resurrection of the pageant.  They agreed and the production took place once again in the desert reserve at Desert Arroyo Middle School.  But from the moment of the pageant’s return, organizers worked with the town of Cave Creek to find a desert location similar to Tse Bonita.  Spur Cross Ranch seemed the perfect solution, but it was not quite ready—until 2006.  Since that year, the Cave Creek Christmas Pageant has continued in its beautiful new desert location at Spur Cross.

In 2007, an unusual winter storm forced a cancellation of the pageant and damaged the set, but volunteers came together to create a stone and mortar inn that should withstand almost anything Mother Nature can throw at it.  And so, 2014 will mark the 62nd anniversary of the Christmas Pageant.

To celebrate that magical and special event, this exhibit includes photos captured in the early days of the pageant, when it was still a small and intimate gathering of Cave Creek townspeople gathering in celebration and community. 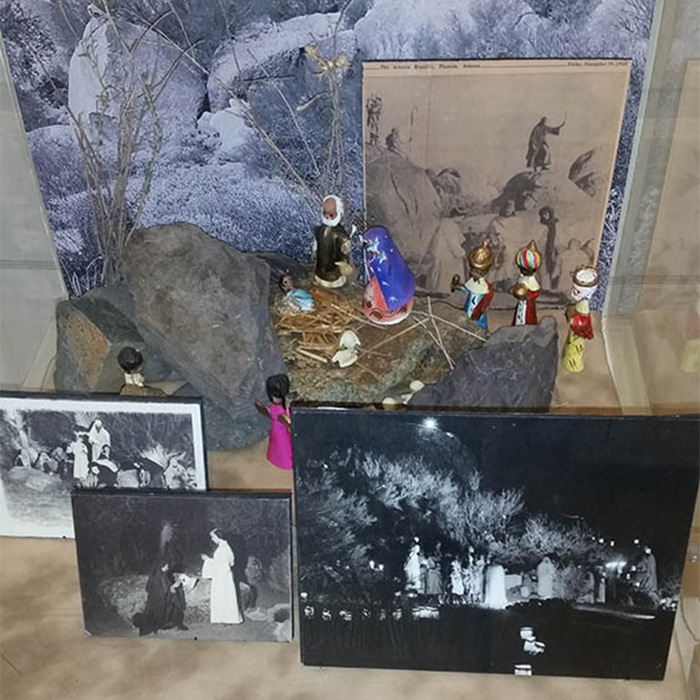