As a nod to the national, state and local elections presently holding us all in their grips, we chose as our October Artifact of the Month this Ballot Box.  It is from our Historic Collections.  We do not know its provenance—as often happened in the early days of the Museum, sometimes during the dark of night, mysterious boxes of this and that would appear at the door of the Museum when folks cleaned out their homes.

What we can tell from examining it is that it is handcrafted, probably from machine-sawn oak that someone sanded smooth and routed the lid, which fits nicely into the opening of the box.  Beneath the iron strap of the hasp, you can see that the box was once varnished, though that finish is long worn off the exposed part of the box with age and handling.   At the back of the box are the crumbling remains of a label—we can read:  “A-V”; “”R-E” and then: “L-L-O-T-S”.  We are surmising that when intact, it said “Cave Creek Ballots”.  Don’t you agree?

On one of the sides there are more fainting markings: “SPOILED BALLOTS” and “WARD NO.”  So evidently the box served multiple purposes.  We estimate from the font that it was probably made in the 1920’s, and from what we know about the history of ballots and voting machines (thank you, Google), we are going to guess that this box faithfully served Cave Creek voters until the mid-to-late 50’s.  After which it probably ended up in someone’s garage or back shed.  Until the day they had a big clean-out and someone thought to drop it off at the Museum instead of taking it to the dup.

An excellent reminder that even the most humble item can be priceless to the Museum.  And that if you are going to drop an item off at the Museum for possible addition to our Collections, please provide us with as much information about the article as possible!  In fact, make an appointment and one of our Collection Chairs or Executive Director would love to talk with you about your donation!

Getting back to our original topic, here’s a little history about ballots: The British colonies in America were the first to use a secret ballot, which later became widespread. But the ballots Americans would recognize today, which contain the names of all candidates, had still not made its appearance. Until the 1880s, there was no single ballot. Political parties issued long “tickets” listing all the candidates running for office on that party. Voters were urged to “vote a straight party ticket.”   Ballots listing all the candidates were first used in Australia about 1857.   In 1889, New York became the first American state to use these ballots. Gradually, it came to replace voting by ticket.  Mechanical Lever Voting machines appeared in 1892 and by the late 1930’s, in all but the most rural areas (think Cave Creek!), used the machines.  But now most voting is done by Optical Scanning (color in the dots), the infamous punch cards, and most recently Direct Recording Electronic. 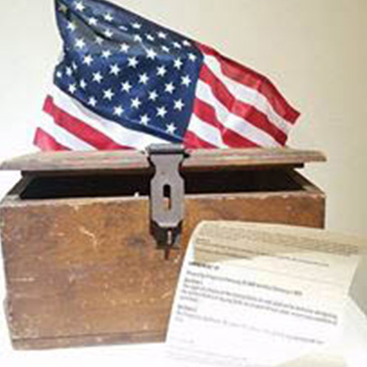