“WHAT’S THE DIFFERENCE BETWEEN AN ARROWHEAD VERSUS A PROJECTILE POINT?”

That’s a pretty common question heard in the Archaeology Wing of the Cave Creek Museum.  What regular people call arrowheads, archaeologists typically call “projectile points”, not   because it sounds more academic, but because stone, wood, bone, antler, copper and other raw material types were used to put sharp points on the ends of all kinds of projectiles, not just arrows.  These projectile points were used for hunting and warfare.

The “technology” that made the first stone points possible was invented in Africa by our ancient ancestors almost 400,000 years ago.  This technology involved knocking bits of stone off a hunk of rock to create a sharp point—archaeologists call this “flaking”. Eventually, these projectile points were attached to shafts of wood—short or long—to create spears, darts, and arrows.  A huge advancement was the development of the atlatl, (pronounced “at-ul at-ul”), a throwing stick that allowed the hunter to fling the projectile point and shaft with great force and distance and with great accuracy.  The bow, created from a length of pliable wood and a taut piece of animal sinew, came much later.

Projectile points come in an amazing variety of shapes and styles, varying according to time periods, culture, and functions.  And points were not just used as the heads of shafts—microscopic inspection of the edges of some ancient points show a wear pattern that indicates they were used in a sawing motion, like a knife!

Because of the materials from which they were fashioned, the points can survive for a long time, were often lost or discarded, and are relatively plentiful—not to mention easily identifiable to most everyone—so scientists have been able to use them to study the long-ago cultures that created them and it is not unusual for ordinary folk to find them in certain areas that were populated by ancient peoples, particularly after a rain.

Here in the Cave Creek-Carefree area, most projectile points found are fashioned from abundantly found local stone, like quartz and chert.  More “exotic” materials, like obsidian, would have been obtained through trade with other tribes.

If you are a local, you may have a found projectile point or two displayed on a shelf—and if you are a visitor, keep a sharp eye out!  Like the varied points exhibited in our Artifact of the Month case, you may have found a timeless remnant painstakingly created by a craftsman thousands of years ago!

And which brings us back to our original question: “What’s the difference between an arrowhead and a projectile point?”  Archaeologists believe that ancient peoples first developed the throwing spear, then the atlatl, and finally the bow.  Some might assume smaller points were used for hunting smaller prey, such as bird and rabbits while larger beasts, like long-horned sheep or bison required something larger, but now scientists think size had to do with how the point was used—was it thrown, flung, or projected?

In general, the scientists think the larger, finely made points are the oldest points, and are called spear points, used as the working ends of spears. The middle sized, fairly thick points are called dart points; these are in between arrows and spear points, and they were used with an atlatl.  And tiny points are the most recent, used at the ends of arrows shot with bows.  So they could be rightly called “arrowheads”! 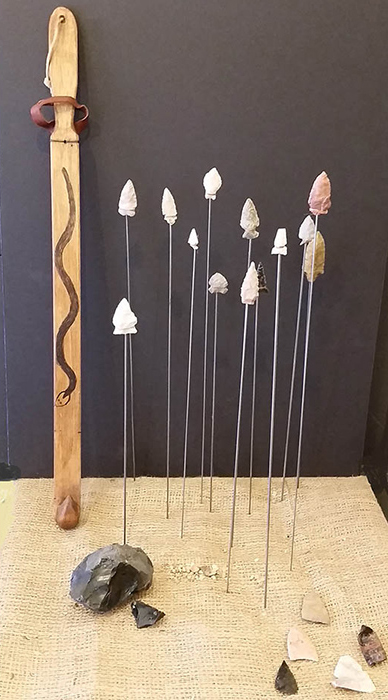